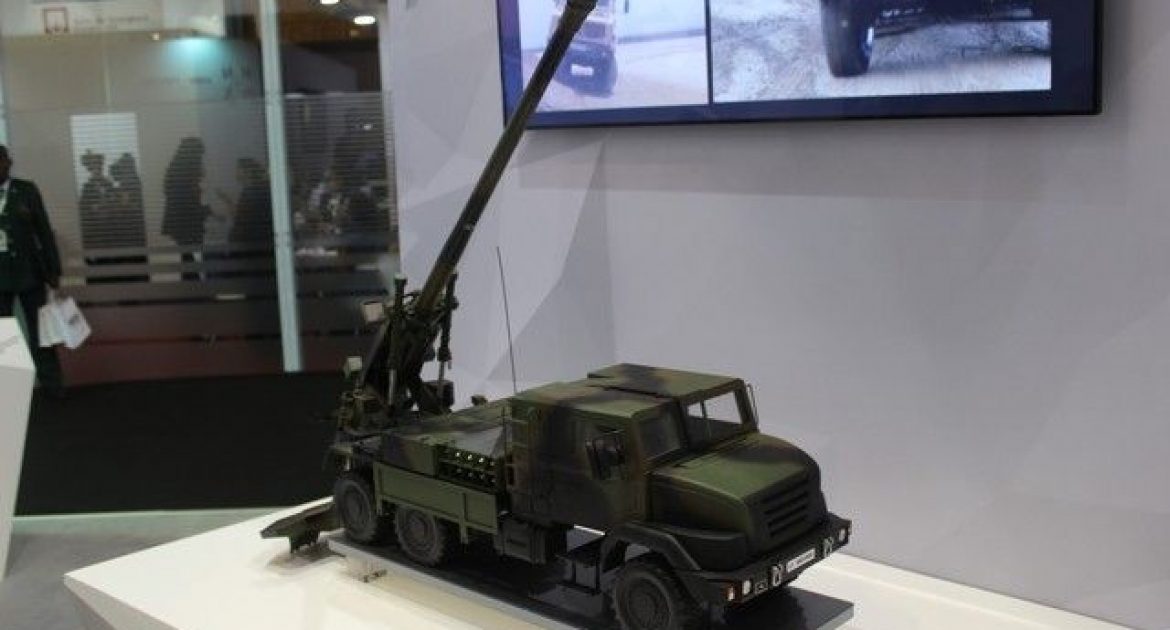 The France-based company Nexter Systems, which for the second time is sharing a booth with KMW, came in Rio de Janeiro with a wide range of innovative products, and among them, two key systems in the fire support range: the CAESAR 155 mm self-propelled howitzer and the 105mm LG1 assault artillery system.
CAESAR has been designed to fulfil the requirements of current conflicts where artillery systems need to be easily reconfigurable to provide the expected fire support and the expected terminal effect.

CAESAR is simple to move and easy to deploy across an operational theatre thanks to its excellent tactical, operational and strategic mobility: it has both off-road and on-road capability (including winding roads) and can be transported by train, landing ship, C-130 or A400M.

Nexter’s CAESAR is easy to use and can be operated with a 4/5-man crew ensuring a high degree of survivability through its shoot and scoot capability (1min 40s after opening fire, CAESAR has already fired 6 rounds and left its position).

The CAESAR provides powerful and accurate firepower (rate of fire: 6 rounds per minute; range: up to 42km with ERFB, 55km with VLAP), with a large range of conventional and smart ammunition.

The CAESAR system consists of a 155mm/52 calibre gun mounted on an off-the-shelf commercial truck. This mobility solution helps reduce CAESAR’s life cycle cost. The system is equipped with an inertial navigation unit and a ballistic computer, and can be connected to any C4I system.

More than 270 units have been ordered by four countries, and 180 CAESAR 6×6 units are already in service in three countries.

The French Army’s deployments in Afghanistan (ISAF), in Lebanon (UNIFIL), and recently in Mali and Irak illustrate the CAESAR’s combat-proven nature.

The next logical step was to develop the concept to accommodate new customer requirements, such as increased payload or fully automated loading. With the introduction of the CAESAR 8×8 variant, in addition to the established CAESAR 6X6, the CAESAR family is growing.

Developed by Nexter, the 105 LG1 is the lightest 105 mm towed artillery gun worldwide. Air-transportable by helicopters, towable by light vehicles, reliable in harsh environment and easy to use and maintain, the 105 LG1 is an excellent assault artillery gun and is used as fire support for fast reaction forces.

The weight of the 105 LG1 gun is less than 1,600 kg, and it can be towed by any light off-road vehicle, without any speed limit on the road. It can be air transported (4 guns per C130) and can also be transported under a light helicopter.

It can be parachuted or air dropped on a pallet at low altitude.

The 105 LG1 gun is easily operated by a crew of 3 to 5 men. It only takes 30 seconds to set it into or take it out of action. The gun can be laid thanks to its inertial positioning and aiming system.

A gun ballistic computer TOP-Lite is proposed to increase the autonomy of use. It can also be connected to a Fire control System (FCS).

The 105 LG1 can fire the M1 ammunition range used worldwide. The 11 km range achieved with this type of shell is considerably extended with the use of Nexter long range ammunition, the HE-ER G3, able to strike beyond 17 km. The 105 LG1 can engage a target in direct firing at up to 2000 m.

The 105 LG1 has been qualified by the French Army and is in service in six different armies: Singapore, Thailand, Indonesia, Belgium, Canada and Colombia.