With more than 300 members in 2020 – major groups, SMEs, start-ups – GICAT embodies the diversity and vitality of the French land and airland defence and security industry, which alone represents 45,000 direct and indirect jobs. It is a high-tech sector serving the performance of our military and civilian forces, and the breeding ground for our strategic autonomy. In 2018, it generated a global turnover of nearly €8 billion, contributing positively through a trickle-down effect to our country’s balance of trade. Half of its revenue is generated from exports. These revenues are vital, especially since they support technological innovation.

In an uncertain and increasingly competitive context, where the global economic crisis has weakened the industry but has amplified international tensions, our mission is to promote the know-how of our members who, through their high-tech equipment, are able to meet growing operational needs.

This is why GICAT supports the actions of its members by facilitating their exchanges with national, European and international institutions and private operators, in order to contribute to their development. It relies in particular on its exhibitions (Eurosatory, ExpoDefensa, ShieldAfrica and Platinum Security Exhibition) to promote their skills internationally.

For more than forty years, GICAT has been able to represent the voice and interests of its members, with a view to anticipating needs and improving risk and threat management in France and around the world. I am committed to continuing these actions, thus contributing to the success of the French forces and of our Defence and Security industry. 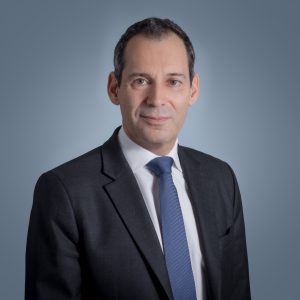 A graduate of the Ecole Polytechnique and Telecom ParisTech, Marc Darmon has spent his entire career in the technology, defence and security sectors.

He began his career at Alcatel in 1988, holding various engineering positions before being promoted to Director of the Military Networks activity. He joined the Thales group in 1998 as Director of Infrastructure Networks, and subsequently held other important operational positions.

In 2004, he became General Manager of Joint Systems, an activity that includes communication and radio networks, command systems, intelligence and security. In 2006, he was appointed Managing Director of Thales Communications, then Deputy Managing Director of the Thales Group in charge of the naval division, before becoming Group Audit and Control Director in 2010.

In 2012, Marc Darmon became Executive Vice President of Thales in charge of the global Secure Information and Communication Systems business, and joined the group’s executive committee. In this capacity, he strengthened Thales’ leadership in the military radio communications market, and accelerated its development in digital platforms and cybersecurity.

He was elected Chairman of GICAT (The french land defence and security industry association) on July 1, 2020.